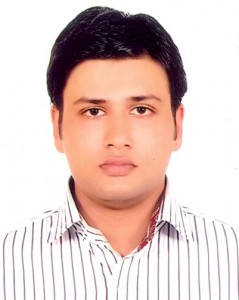 Reatul graduated from University of Dhaka with BPharm (Hons.) degree in 2008 and completed MPharm in Pharmaceutical Technology degree in 2009. He worked for about a year in Product Development department in Novartis Bangladesh Limited before joining in the Department of Pharmacy at State University of Bangladesh in 2010 as a Lecturer. He was promoted to the post of Senior Lecturer in 2012 and later at the year he went to United Kingdom for higher studies. Reatul completed Master of Research in Drug Delivery Systems degree in 2013 at the University of Strathclyde, Glasgow. There, he worked on tumor-targeted nanocarriers at the Strathclyde Institute of Pharmacy and Biomedical Sciences (SIPBS). He rejoined in State University of Bangladesh in 2013 and was promoted to the post of Assistant Professor in 2014. Later in 2014, Reatul went to Europe to start his doctoral research under Erasmus Mundus Joint Doctorate program. His research was focused on developing nanocarriers for drug delivery in brain tumors. In 2017, Reatul obtained PhD in Biomedical and Pharmaceutical Sciences from the University of Liege (Liege, Belgium) and PhD in Experimental and Clinical Pharmacology from University of Angers (Angers, France). In 2018, he joined in the Department of Pharmacy at East West University, Dhaka.

His research is mainly focused on the development of nanocarriers for cancer therapy. Reatul authored 8 publications including articles in high-impact journals such as Journal of Controlled Release, Nanoscale, and Nanomedicine: Nanotechnology, Biology and Medicine. He also authored 1 book chapter with Elsevier. His research attracted 200+ citations. He has participated in many international conferences.

Reatul has been awarded with the Bangabandhu Fellowship on Science and ICT 2012-13, Erasmus Mundus Joint Doctorate Fellowship 2014-17 and Fonds Léon Fredericq Operational and Equipment Grant 2015-2018.